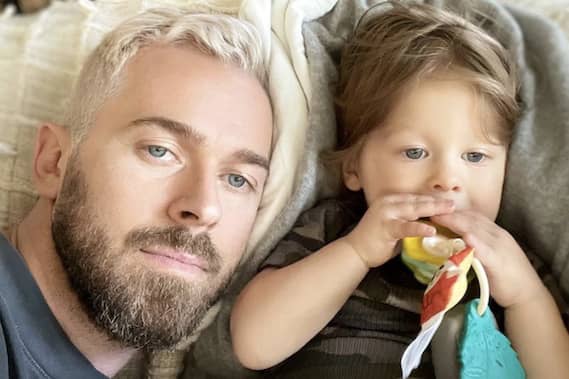 Artem Chigvintsev’s baby boy Matteo is so cute, even while breaking his dad’s Dancing with the Stars trophy. Chigvintsev’s wife Nikki Bella posted a clip online of Matteo getting ready to cheer on his dad during the Season 30 premiere. The 13-month-old broke off a piece of the Mirrorball Trophy, but it’s nothing a little glue can’t fix.

“Oh, shoot,” Bella said as Matteo snapped a piece off of the trophy. “Oh, no. OK. Artem, I will fix that. Oh, boy. I’ll fix that before you get home.”

Bella tried to snap the logo back onto the trophy. Matteo grabbed the broken piece and put it into his mouth while saying “Dada.” This is quite possibly one of the cutest videos on the internet. Bella has been sharing so many videos of Matteo, including a recent clip of him walking. Her entire pregnancy was documented on her E! show Total Bellas.

Chigvintsev won Dancing with the Stars for the very first time with his partner Kaitlyn Bristowe last season. The Mirrorball Trophy was well deserved after he was left off of the pro dancer roster on Season 28. Bella and Matteo were both cheering Chigvintsev on all season long. They clearly plan to do the same this season as he competes with The Office star Melora Hardin.

“Teo and I will get your trophy fixed!!! Lol Oooppss ha! We gotta a strong boy here!!” Bella wrote on Instagram.

The Mirrorball Trophy isn’t exactly made out of the most durable material. Nicole Scherzinger won Season 10 of Dancing with the Stars with Derek Hough. She confessed in 2019 that her trophy literally “fell apart in pieces.” Her trophy was actually redone and given back to her. That’s good news for Chigvintsev in case he ever wants to hand it back to Dancing with the Stars to have it fixed.

Chigvintsev and Hardin scored 26 points for their Tango last night. The pair could be well on their way to earning Chigvintsev’s second Mirrorball Trophy. He’ll just have to keep this next one on a higher shelf out of Matteo’s reach!