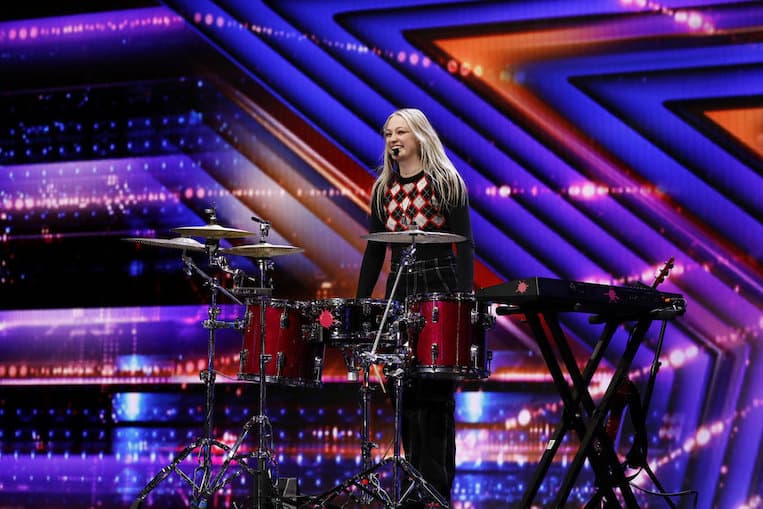 Mia Morris is one of 55 acts chosen to move on to the America’s Got Talent Season 17 live shows, competing for America’s vote to go to the Finals. She is a young musician who performs as a one woman band, playing various instruments.

Mia Morris Is a Teenage One Woman Band

Mia is still in high school, but she’s already an accomplished musician. She shared in an interview that she started playing drums at 9 years old and began posting videos of herself playing at just 10. By age 12, she decided she wanted to start playing more instruments.

“I didn’t want to just play the drum parts, I wanted to play everything,” she said. “Guitar, bass, keys..really anything the songs called for. The next level of creativity and excitement was to be able to turn these cover songs into anything I wanted since I was the one playing all the parts.”

According to her NBC bio, Mia has been working as a touring and studio musician since age 14, working with over 160 artists in various genres, including Pam Tillis and Linsday Ell. She’s also released over 40 songs, available to listen to on Spotify. Her YouTube channel includes vlogs and music videos.

The Judges Think Mia Is a Star

For her audition on AGT Season 17, Mia Morris used a loop pedal to perform an original song by herself on various instruments, including guitar, keyboard, and drums. Mia described the loop pedal as “a recording studio at your feet.”

The crowd went wild for Mia’s performance, and the judges praised her. Howie Mandel called her a star and said he would watch her in concert. Sofia Vergara called her “one of the coolest girls” who’s ever been on the show. All four judges voted “yes” to sending her through.

Now Mia is performing in the live shows for a chance to go to the Finals. You can catch her next performance Tuesday night on NBC, and vote for her on the NBC website or the AGT app.