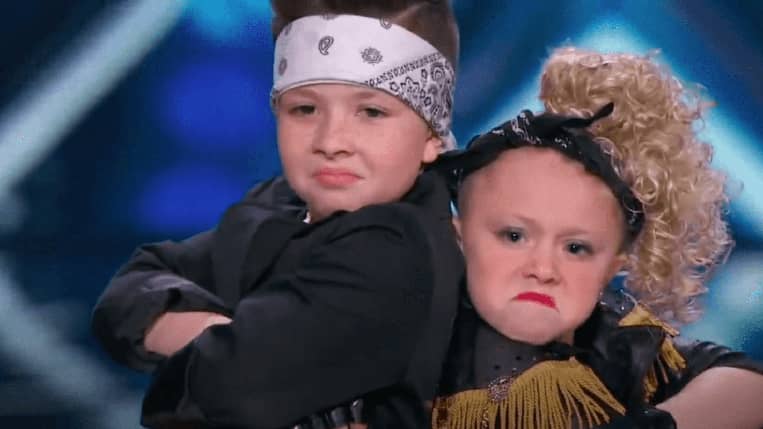 Elin Helton and Noah Evans were the very first act to hit the ‘AGT’ stage during the Season 10 auditions. They brought an awesome energy and stage presence with them. The judges couldn’t help but notice the mean looks on their faces throughout their dance performance and they easily fell in love with the pair.

Kid Dancers Bring Some Major Attitude To Their ‘AGT’ Dance

These two are best friends who love all of the same things including dancing. When asked in their pre-audition interview if they were boyfriend and girlfriend, Helton was quick to shoot that down. They made their way to the stage ready to impress the judges.

The pair stood back to back with mean expressions on their faces before they launched into a dance routine to “U Can’t Touch This” by MC Hammer. They did some serious throwback dance moves including the running man and the Hammer dance.

The judges could not wipe the smiles off of their faces after watching this fun audition. Helton, 7 and Evans, 8 finished the routine the same way they started it, mean-mugging with their arms crossed while standing back to back.

Howard Stern tried to imitate Helton’s facial expression throughout the performance. His attempt was not as cute as the pint-sized diva, but it was still fun to watch.

“It was really cute,” Mel B added. “I have a 7-year-old daughter and she can’t move like that.”

“I couldn’t take my eyes off of your face,” Heidi Klum said pointing at Helton.

When Howie Mandel asked if Helton did anything besides dancing, she revealed that she also plays golf.

It was no surprise when all four judges voted to send this tiny dancing duo to the Judge Cuts. Viewers got to see a short clip of them dancing to Tag Team’s “Whoomp! (There It Is).” It wasn’t enough to move them forward in the competition.

Two years after Evans and Helton’s ‘AGT’ journey came to an end, a YouTube video was posted showing the pair dancing together in a studio.

In 2018, Helton got to perform during the CMA Country Christmas special with Reba McEntire. On Facebook, she wrote that it was “such a fun experience with some of country’s coolest artists and my best friends.”

In October, Helton posted on Facebook that she was going to be on the Disney Channel show Disney Fam Jam. This is a dance competition where two families work with professional choreographers and go head-to-head to put on show-stopping performances. The family with the most audience votes wins $10,000 and the other family receives $2,500.

If you enjoyed seeing this adorable dancing duo, make sure to check out the compilation below. It features eight of the cutest kids to audition on talent shows.

What did you think of this tiny dancing duo’s audition full of mean-mugging?