The Best Moments You Probably Missed on The ‘DWTS’ Season 31 Finale
May 27, 2022
Be the First to Comment 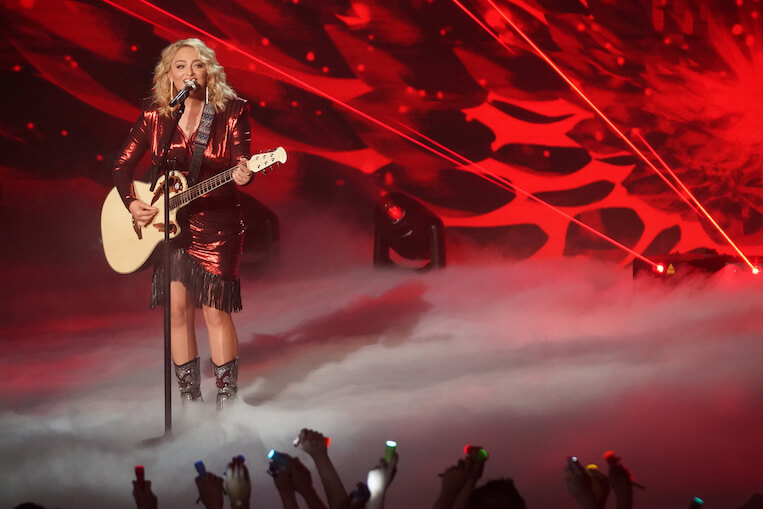 American Idol runner up HunterGirl reminisces on one of the best moments of the competition. On Live with Kelly and Ryan, she explained that her most surreal moment was meeting her idol, Carrie Underwood.

Since American Idol concluded, HunterGirl has joined multiple talk shows to share her experiences on the series. Out of all the moments in the landmark season, the country singer emphasized that mentoring with Underwood was the most surreal for her.

“Oh my gosh, I lost my mind. I remember walking in,” she said. “I walked in and I looked at her and I said every word to your song, I just forgot it because I’m freaking out right now because I was having to sing for her!”

Even though this singer was young when Underwood won the series, it was a moment she never forgot. To this day, HunterGirl says that Underwood’s victory is what inspired her to audition for the series.

Since HunterGirl’s platinum ticket audition, fans saw her as splitting image of Underwood. Each time she took the stage she was radiating with both personality and talent. Since she has that type of posie and showmanship, fans expect her to find immediate success in the country music industry similar to Underwood.

What is HunterGirl Up To Now?

HunterGirl is excited to return to the studio and create more music. At the end of American Idol, this singer released her newest single “Red Bird,” which has done exceptionally well on the iTunes charts.

Inspiration for “Red Bird” came from her mother’s logic that seeing a red bird means someone is looking out for her. When HunterGirl was nervous about her American Idol audition airing, she saw a red bird outside of her window and immediately knew everything would be okay.

The singer recorded the song in Nashville soon after. “Red Bird” hit the iTunes Chart after its American Idol release and has remained there ever since. Since the series ended, “Red Bird” pulled ahead of Noah Thompson’s “One Day Tonight” on the all genres iTunes Chart. On May 26, HunterGirl celebrated her single hitting No. 1 on the all genre charts.