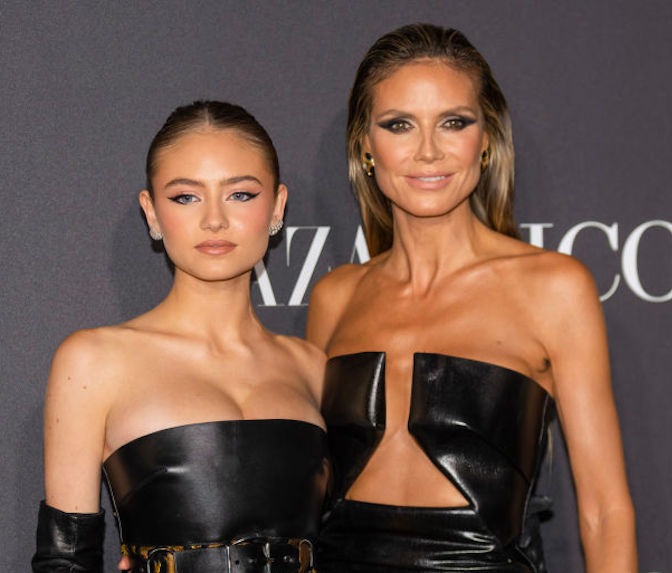 Heidi Klum and daughter Leni Klum recently celebrated womanhood in a sultry photoshoot for an Italian lingerie brand, Intimissimi. However, while the advertisement was intended to send a message of empowerment, the internet didn’t seem thrilled, but rather disturbed.

Heidi Klum Gets Slammed for Modeling with Her Daughter

Wearing a pair of black and white lacey intimates, the mother-and-daughter duo has indeed proven that modelling is meant for their genes. Heidi and Leni Klum have been explicit in saying that they had fun during their Intimissimi advertisement campaign. Despite so, some people found this sexy-themed project unfit and bothersome.

“A story of self-confidence, joy of life and love between a mother and a daughter,” the brand wrote.

This caption appeared distasteful to some, leading them to criticize the advertisement. One commented that the photo and caption combined felt weird. Furthermore, some noted that a mother and daughter teaming up for a lingerie campaign is “unnecessary” and “creepy.”

“Sexualizing your daughter the moment they turn legal is weird,” a user wrote.

For others, it was odd for the Victoria Secret Angel to allow her daughter to model an intimate apparel. Considering that she calls herself a helicopter mom, some believed that it was too soon for Leni to participate in such advertisement.

While several people seemed unconvinced that the photoshoot merely suggests motherly love, there were also comments that side in favor of the duo. Apparently, the sexy advertisement still seemed normal to some.

“Since when is it sick or weird to show a woman – young or old – being comfortable in her own skin?!” a user wrote. “This says more about all of your internalized misogyny and sexualisation of women’s bodies.”

Another commented that there’s nothing negative with the advertisement. Some even argued that both women shouldn’t be attacked because both are of legal age and thus, they can decide for themselves.

“Love that your mom supports you and that you both see modeling for the art form of it,” another person commented.

It wasn’t a secret to the public that Leni Klum wanted to be a model since 11. Finally entering the industry at 16, she landed in multiple covers of magazines and modeled for different brands. Now that she turned 18, perhaps this lingerie photoshoot is a step forward to a more mature Leni Klum.

Heidi Klum and her daughter haven’t spoken out about this issue yet. Meanwhile, Intimissimi is now dealing with criticisms for launching this sensual campaign.

‘AGT,’ ‘The Voice’ Star Nolan Neal’s Cause of Death Has Been Revealed