The Best Moments You Probably Missed on The ‘DWTS’ Season 31 Finale
October 4, 2021
Be the First to Comment 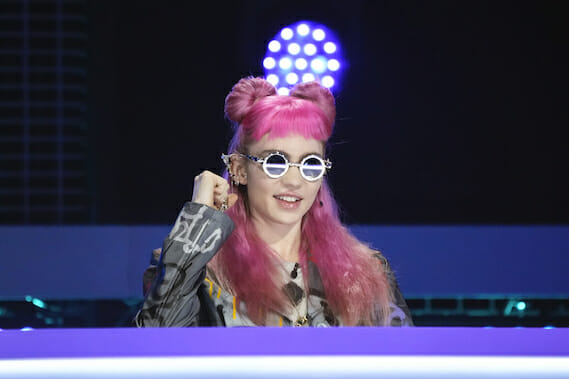 Ever since Grimes’ public “semi-separation” with Elon Musk she has shared how the paparazzi has affected her daily life. Since premiering a new song dedicated to the paparazzi on Instagram, she began trolling the world. When she’s in public she’s making sure to do “headline worthy” activities.

This weekend Grimes publicly read The Communist Manifesto by Karl Marx. Even though many publications went wild with rumors that the Canadian singer has turned to communism after her break up, Grimes admitted it was all a joke.

“I was really stressed when paparazzi wouldn’t stop following me this wk but then I realized it was opportunity to troll .. i swear this headline omg wtf haha im dead,” said Grimes. “Full disclosure I’m still living with e and I am not a communist (although there are some very smart ideas in this book).”

She really figured out a way to spin a bad situation into something better for herself. Grimes has not been quiet about how the break up has spun a lot of attention toward her. Although she is now a judge on FOX’s newest competition show, Alter Ego I’m not so sure this bad press is coming directly from that.

It’s no secret that Elon Musk is a giant name in the American public eye. It’s hard to find someone who has genuinely never heard of one of the biggest names in SpaceX and Tesla. With that being said, people know who Grimes is because of her relationship with Musk, not her pop career. It doesn’t surprise me that paparazzo can’t get enough of this singer following the separation.

On September 30, the pop singer dropped a tune on Instagram related to how the paparazzo treats her. The lyrics are rather morbid considering they mention death as an option for her escape, but it’s really a bop. She shared that she wrote and produced this song within a week following “privacy invasion, bad press, online hate and harassment.”

This song was really step one for the singer. Since her recent announcement this song has truly felt like it was her first step at reclaiming her life/privacy. Since she knows exactly what paparazzo wants to see from her, she’s doing it in the best way possible. Grimes is someone who breaks fashion norms. She often dresses like video game based characters and looks insanely confident while doing so. Considering she’s normally seen in risky outfits, the way she trolls could be justified. Just like in the headline she shared, some people actually thought she was reading The Communist Manifesto seriously.