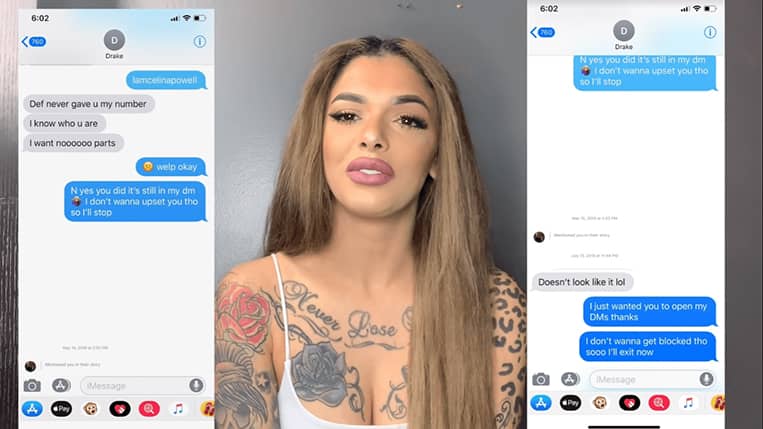 Celina is known as a “clout chaser” and has even been nicknamed “Black Widow” for her involvement with several rappers. People on social media praised Drake’s handling of the alleged contact.

Although the alleged texts are old, they recently went viral on Instagram and Twitter. Drake tells Celina, “Def never gave u my number,” adding, “I know who u are.” He tells her, “I want noooooo parts.”

RELATED: KYLIE JENNER MET TRAVIS SCOTT AT THE EXACT TIME DRAKE’S SONG CLAIMS SHE WAS HIS SIDE PIECE!?!

Celina then responds with a frowning face and a “welp okay.” Then she tells Drake that he did give her his number, saying it’s “still in my dm.” She adds, “I don’t wanna upset you tho so I’ll stop.”

Drake then sends her a screenshot of their Instagram DMs and says, “Doesn’t look like it lol.” Celina admits that she “just wanted you to open my DMs.” In the last text, she writes, “I don’t wanna get blocked tho sooo I’ll exit now.”

Twitter users loved Drake’s response, with one person writing, “that’s how everyone should text her.”

Celina talked about the alleged text exchange on YouTube in 2019, saying she had a “rat in the industry” who gives her celebrities’ numbers. She summed up the conversation and said, “He doesn’t like me, which I’m still depressed about.”

According to Ace Showbiz, Celina posted on Instagram stories when the texts went viral this month, writing, “Not me being dragged 2 years later after Drake curved me.”

Based on the texts, it looks like Drake was familiar with Celina’s reputation. In 2018, she claimed she was pregnant with rapper Offset’s baby, even posting an ultrasound. She later admitted that she made it up.

Celina also made similar claims against Chief Keef and Fetty Wap, and later claimed that Snoop Dogg cheated on his wife with her. In December 2018, she was arrested by bounty hunters. According to TMZ, she had as much as $61,000 in outstanding bonds.