Harry Styles Wins Album of the Year Grammy, One Direction Bandmates Respond
April 11, 2019
Be the First to Comment 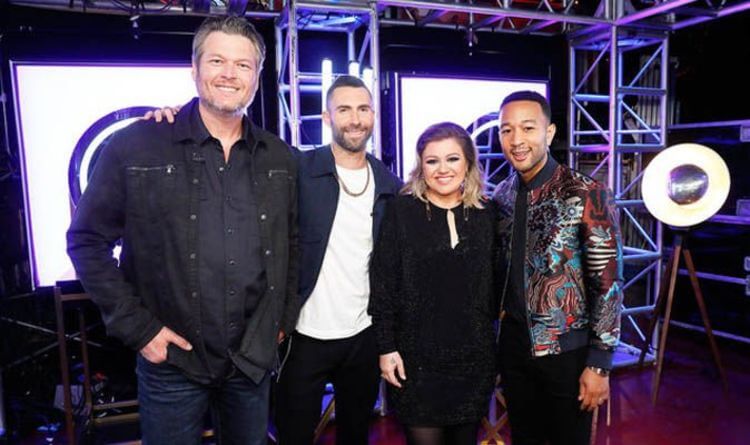 Adam Levine, Kelly Clarkson, and the other coaches on The Voice can get pretty competitive. After all, they’re trying to win the show as much as the contestants are. Their banter and in-fighting might make you think that they don’t get along off screen, but that’s not the case.

In fact, the show’s current four judges have frequently shown support for each other in real life. That includes helping each other out with big life changes, complimenting each other in the media, and making appearances at each other’s events. Let’s check out a few examples below.

Kelly recently talked to Today about her decision to move from Tennessee to California. As it turns out, Adam helped her with the transition by finding her a house. “He’s like a real estate guru,” Kelly said. “It’s the most amazing house I’ve ever lived in. He’s so good!”

Kelly had a lot of Voice cameos on her Meaning of Life tour. Not only did winner Brynn Cartelli accompany her on the tour, but Kelly performed with other former contestants and fellow coach John Legend. He appeared during her “Minute + a Glass of Wine” segment to sing “Run Run Run.”

Kelly introduced John by saying he has a “heart of gold” and is “way cooler than me.” She called him “one of my favorite singers.”

3. Blake Shelton and Adam Levine call each other friend.

Blake and Adam have been on the show together since the beginning, and they love to bicker like an old married couple. But it’s all in good fun, as the two of them are actually good friends. “I’ve stayed at the man’s house with him,” Blake said in 2017. “He’s one of the best friends that I have, but I still want to kill him sometimes.”

Adam also told People about the first time he met Blake. “He was not a cookie-cutter guy, and the second we met, we were friends,” he said. “All of the bulls— that we do comes from a place of love.”

John recently told Seth Meyers that he and Adam “dated in the same circles.” He said they used to hang out together at Sports Illustrated Swimsuit Edition parties. It’s no wonder they both ended up marrying supermodels.

“We’re both married with two kids now,” John pointed out. “Things have settled down.”

In honor of her concert in Oklahoma, Kelly chose to cover a song by her fellow Voice coach. Of course, she also made sure to get a little “dig” in through her song choice. She changed the lyrics to “Boys ‘Round Here” to be about women. “He’s got one of the baddest catalogs,” she said afterward. “It’s so good.”

Adam appeared on Ellen last year, during Kelly’s first season on the show. Although he said he hoped he would win, he admitted that he “wouldn’t mind” if Kelly’s team came out on top (which eventually happened).

“First of all, I love her to pieces — don’t you love her so much?” he said.
“It’d be cool if she kind of came in first season and just like, boom. That’s what I did.”

In 2017, Blake presented Kelly with an award at Variety‘s Power of Women event. As expected, his speech was full of funny stories, including trying to set her up with people when she was single, and a New Year’s Eve where he says the two of them and Adam Levine “almost went to jail.”

When she took the stage, Kelly said she was nervous to give the speech, but Blake made her feel “more comfortable.”

‘Britain’s Got Talent’s’ David Williams May Join The ‘X-Factor’… Will It Help?