Haven’t We Seen This Before? Did Val Chmerkovskiy Rip Off A Dance in The ‘DWTS’ Finale?
December 10, 2021
Be the First to Comment 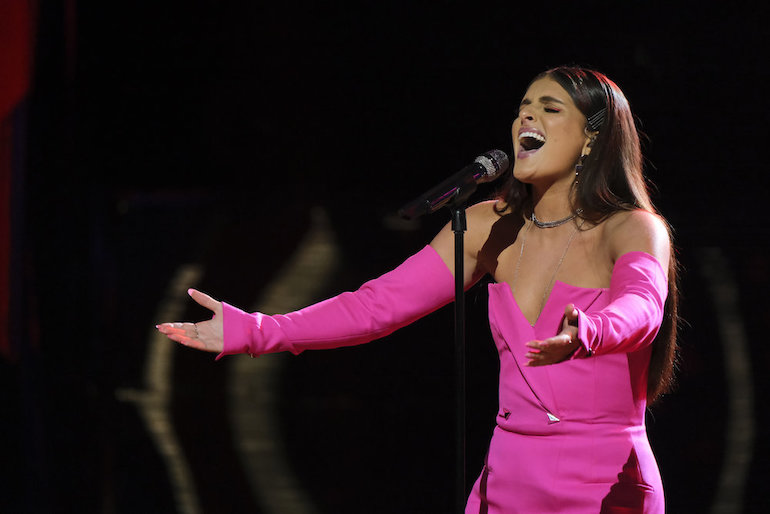 Bella DeNapoli was an instant fan favorite on The Voice this season after premiering her catch phrase “holy cannoli” in her blind audition. This singer was one of the front runners for Team Ariana before her surprising elimination. Fans couldn’t get enough of her large vocal range on the show.

Even though Bella only made it into the Top 20, she will be remembered for her unforgettable battle round performance with Katie Rae. Their rendition of “No More Tears (Enough Is Enough)” by Barbra Streisand and Donna Summer currently has 3.2 million views on The Voice‘s YouTube channel.

Since facing elimination after her rendition of “The Sweet Escape” by Gwen Stefani, this singer has definitely not sat still. The past week, she has been sharing that “something exciting” was on the horizon.

Bella now released her first single following her time on the series. She released her newest song “idk” on all streaming platforms and has shared a teaser music video on her Instagram and TikTok pages. Other singers from The Voice and her coach, Ariana Grande, commented support and excitement for Bella’s release.

The day before Bella’s new release, she shared a music video for the new song. The video is doing extremely well on social media, so I wouldn’t be surprised if this song goes viral. The song currently has 165,020 views on Instagram and 46,000 views on her TikTok.

This teaser video clocks in at two minutes, only half of the original song’s run time. The video features Bella as the main focus in a dark room. Dancers are placed behind the singer, emphasizing certain parts of the song with their bodies. At some points, it’s difficult to see Bella and her dancers. This is a great camera technique considering the song is about someone being a stranger in their mind.

Grande shared this video to her Instagram story with the caption “holy sh*t FRIDAY @belladenapoli ‘idk’.”

Within the comments of this teaser video, you’ll recognize many names from the original Team Ariana squad. It’s great to see this team supporting one another even after elimination on the series.

Today, the full song has hit all streaming platforms. It was obvious from The Voice that Bella wanted to go the pop route and she nailed this song. I have nothing but good things to say about “idk.” I was apart of the crowd that loved Bella since her audition, so I’m really excited for her to fully launch her singing career. With Grande’s support and the views on social media, it’s only a matter of time before this song goes TikTok viral.