‘American Idol’ Champ Caleb Johnson Was ‘Really Bummed’ About Winning
April 7, 2020
Be the First to Comment 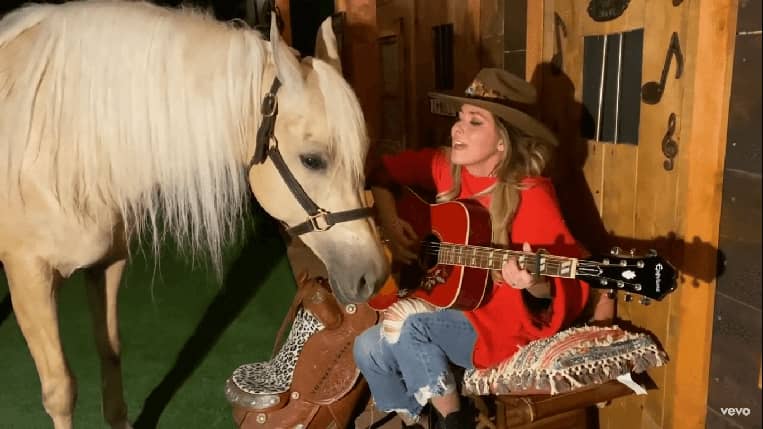 Country star Shania Twain and her horse delivered an at-home performance from quarantine on Sunday night. It was part of a special called ACM Presents: Our Country, which aired on CBS.

Shania performed two of her hits from her Las Vegas home, while her horse and dog hung out with her. It doesn’t get much more country than that!

Shania Twain Sings With Her Horse

Shania strummed her guitar and sang a medley of two songs, “Honey, I’m Home” and “Man! I Feel Like a Woman!” Her dog can be seen curled up at her feet, while her horse sniffs at her guitar and nuzzles up to her as she sings.

The performance was part of ACM Presents: Our Country, which was a replacement for the originally scheduled Acadamey of Country Music Awards. According to People, the ceremony was supposed to take place on Sunday, but had to be postponed until September due to the coronavirus pandemic.

The special was hosted by Gayle King, and also featured a performance from Blake Shelton and Gwen Stefani, who sang a romantic rendition of “Nobody But You” from their backyard.

What Did Fans Think Of Shania’s Horse?

Twitter users had plenty of funny things to say about Shania and her horse. One fan called it “peak lockdown,” while another admired how lovingly Shania’s horse seemed to look at her. They also commented on how Shania seemingly doesn’t age.

Shania’s ultra-country performance was apparently a little confusing to the Brits. UK show This Morning shared the video of Shania singing with her horse on Monday, prompting host Phillip Schofield to call it “weird.”

If singing with your horse is weird, we don’t want to be normal.

Twin Brothers In Different Countries Meet At Border During Coronavirus