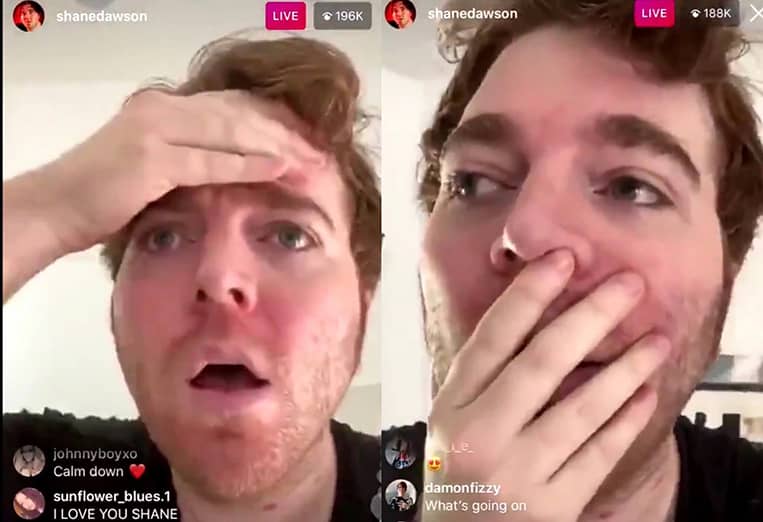 Tati Westbrook’s latest 40-minute video full of bombshells may have broken the internet, but it also broke Shane Dawson. Shane made an Instagram Live video to share his frustration and anger about the claims made by Tati in the YouTube video. And, he totally did seem like he was losing his mind. Watch a clip of his breakdown below.

In Tati’s video, she says “I’ve lost over a year of my life terrified of social media and speaking up against the people that used, coerced and manipulated me into uploading my video in May of last year.” She points directly to Shane and Jeffree Star for pushing her to publicly cancel James Charles for being a sexual predator.

Shane Dawson Is Losing His Mind Over Tati’s Latest Video

“This is insane” Shane kept muttering in his since-deleted Instagram Live video. He said that he wanted to wait for as many people to join the Live as possible so that he could tell everyone how Tati is lying. Shane watching Tati’s video as he was on Instagram and he said that Tati messaged drama channels to give them tips about James Charles being a sexual predator. “You are fake crying,” Shane said as Tati’s video played in the background. At the point in the video where she mentions being a victim of abuse herself, Shane rolled his eyes. Before he ended his Instagram Live session, Shane clasped his hand over his mouth and was red in the face. He kept saying “Oh my God” in disbelief. Shane also posted a since-deleted tweet where he said “THIS IS A F*CKING LIE AND IM LOSING MY MIND!!!!”

In the background of Shane’s Instagram Live video, you could definitely hear his fiancee Ryland Adams making comments as he watched Tati’s video. He then took to Twitter to further voice his opinions and support Shane. Ryland believes that Tati is now siding with James Charles after initially denouncing him in her “Bye Sister” video. He believes this is an attempt to save her career. Ryland said that Tati did not include any receipts in her most recent video where she accused Shane and Jeffree Star of manipulating her because “she didn’t want to expose the countless times she told Shane that she was a big girl doing this ONLY for herself.”

“Hope you enjoy those sold out vitamins that made you millions in minutes from Shane’s support you two-faced liar,” he said finishing off his tweetstorm. Tati’s vitamin brand first caused all of this drama when James promoted it’s biggest competition in an Instagram post last year. Ryland credits Shane in helping her make sales and make millions against her competitors after this scandal.

Twitter Is Fuming About Shane’s Reaction To Tati’s Video

After Shane’s outburst on Instagram Live, people are upset that he completely brushed off the fact that Tati is a sexual assault survivor. One Twitter user said “the way shane rolled his eyes when tati said that she was a victim of abuse and sexual assault and claimed she was “manipulative” for saying that …….. he’s literal SCUM.” Another called him “pure evil.”

Another Twitter user said “#shanedawson stays silent the past week basically ignoring everything that’s been said about him but loses his sh*t when Tati posts a video? I don’t get it.”

SEE ALSO: SHANE DAWSON’S APOLOGY FOR RACIST PAST HAS PEOPLE ANGRIER — TWITTER IS NOT FORGIVING HIM

Shane has been at the center of tons of drama lately after several of his past sketches resurfaced where he was wearing blackface. He has also been accused of pedophilia and inappropriate comments sexualizing minors.

Are Khloe Kardashian And Tristan Thompson Engaged? — A Closer Look At Her New Huge Diamond Ring