Who is Queen Cobra? ‘The Masked Singer’ Prediction + Clues Decoded!
November 13, 2018
Be the First to Comment 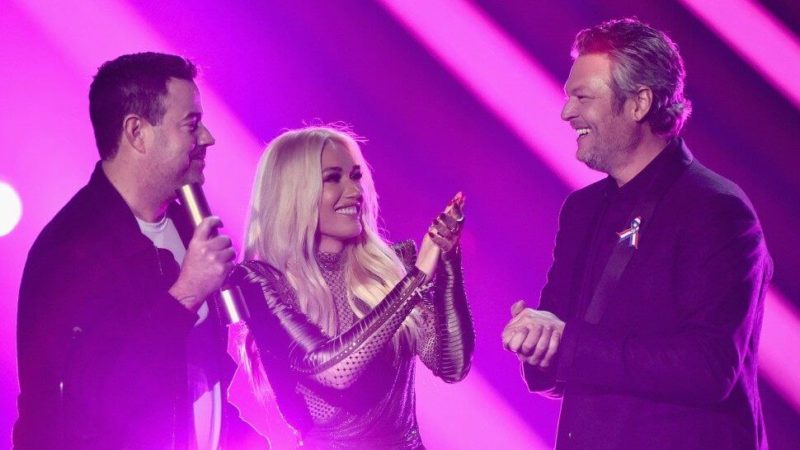 Last night at the People’s Choice Awards, The Voice scored a big win! The show beat out American Idol and America’s Got Talent for the “Competition Show” category. Plus, coach Blake Shelton won “Best Country Artist” and managed to create one of the most memorable and awkward moments of the night!

Let’s take a look at the clip here:

Host Carson Daly and coach Blake Shelton went on stage to accept the award on behalf of The Voice. Carson started by thanking the  cast and crew, along with the firefighters working on the California wildfires, a hot topic at the awards show last night. Carson also thanked former coach Gwen Stefani, who was in attendance with her boyfriend Blake Shelton. Blake then goes up to the mic to calls Gwen his “all-time favorite coach.” That has to hurt for the other half of Shevine, Adam Levine! He went on to declare his love for his pop star girlfriend.

But (unfortunately) that wasn’t it. Carson and Blake then encourage Gwen to come up to the stage and say a few words. After awkwardly rejecting the idea at first, she finally (after Carson starts a chant) walks up to the stage. She clearly did not know this was going to happen. And she was not about it. Then Carson makes a joke about how he doesn’t understand how Blake “landed” his old friend Gwen. Gwen then gushes about being with Blake. It was all too much. Nobody needed to see this. Blake finally ended things by going to the mic, saying “thank you guys so much,” and walking off.

Or that would’ve been the end but Carson always has to comment. So what’d he go with this time? “They’re going to get a room.” To end on a better note, Blake was also on the stage for another win last night! He took home the award in the “Country Artist” category. In that speech, he wore a ribbon to honor his dad, who is a veteran. He also joked about putting his award in the bar and buying a beer for anyone who comes to look at it! That’s the Blake we know and love.