Who is the Knight? ‘The Masked Singer’ Prediction & Clues!
November 7, 2018
Be the First to Comment To refresh your memory, here is Tyshawn’s Blind Audition:

Tyshawn Colquitt was featured on the premiere episode of The Voice this season. Before his appearance, he had won Live at the Apollo three times as a teen and three times as an adult. His backstory on the show told that he was the oldest of 12 siblings, growing up in Cincinnati. His family struggled to make ends meet. Because of this, Tyshawn founded a pound cake company, Pound 4 Sound, with his mother. The company delivers homemade pound cakes with a song from Tyshawn himself.

Yet in the recently conducted interview by Radar, Tyshawn Colquitt revealed he went to more extreme measures in the past. About his dark history, he said:

“During the time, I did not have a male figure in my life. It has always been a rocking chair with me. Honestly, I was not expecting it to go as big as it did. So, I went to a place where I just gave up. I did not want to let anyone down and I did what I had to do to keep the money going.” 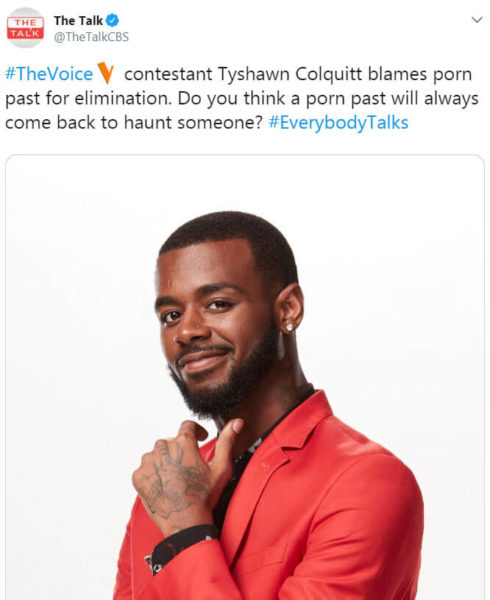 But Tyshawn posted an Instagram about it as well and has received overwhelmingly positive feedback. Many of his followers encouraged him, saying his past doesn’t define him. Many say that his talent speaks for itself. For Tyshawn Colquitt, he acknowledges his mistakes and hopes to move on from it.