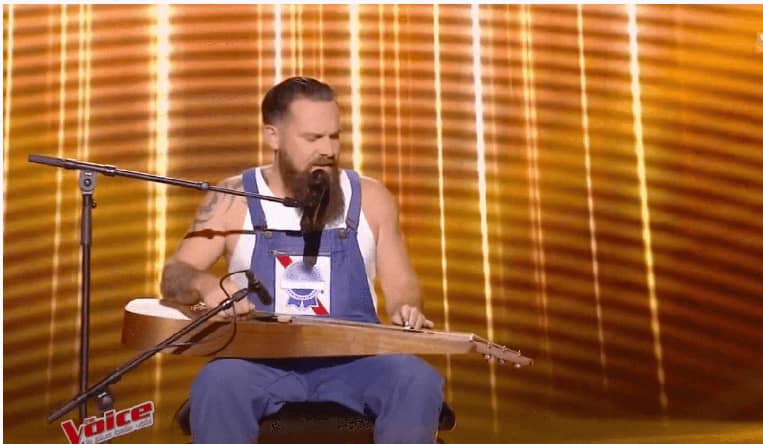 Will Barber performed “Another Brick In The Wall” by Pink Floyd during his 2017 audition for The Voice France. His superb guitar playing and raspy voice were just a few of the reasons why his audition is one of the most-watched of all time. Take a look at the unforgettable moment below.

Will Barber Brought Something Unique To ‘The Voice France’

Will started off the song playing a lap steel guitar. We do not often see this instrument played with a slider on The Voice, but Will definitely made it his own. He very quietly sang a few notes of the song before Coach Zazie was hooked. She practically leaped out of her chair to press her button and turn around. She was complexity baffled and impressed the entire time as she watched Will belt the classic rock tune.

SEE ALSO: HAILED PHILIPPINES’ BOB MARLEY ON ‘THE VOICE’ — NOW BACK ON THE STREET DOING WHAT?

The three other coaches Florent Pagny, Mika and Matt Pokora also turned their chairs during the bridge of the song where Will got to show the range of his voice. It was a hard choice for him in the end to choose his coach. Ultimately, he ended up choosing to be on Team Zazie as she was the first to turn her chair.

In the Battles, he went up against DeLaurentis singing “Thank U” by Alanis Morissette. While many were unhappy with the song choice because it did not full showcase Will’s rock persona, he was still able to win the battle.

During the Épreuves Ultimes round, Will sang “J’aime regarder les filles” by Patrick Coutin. He was eliminated from the competition when Nicola Cavallaro was chosen as the winner of the round.

Will’s audition now has over 105 million views. “This dude doesn’t need audition, he is a done musician, he should just write his own songs,” one comment on the video of Will’s audition said. And, much to fans delight, he has done just that. After appearing on The Voice France, Will continued to pursue music as a career. He started a YouTube channel and has gone on several tours playing gigs all over the world.

He often shares snaps on Instagram of his performances on tour, playing the lap steel guitar just as he did for his audition. However, despite his popularity on the show, he only has about 8,000 followers on Instagram and a little more than 9,000 on YouTube.

After coming out with his second album, he recently teased that he has some new exciting things coming for his loyal fans.

Will reprised the Pink Floyd cover that made him go viral again on his tour, once more playing his lap steel guitar.

More recently, the singer has been enjoying farm life, tending to all of his animals in the midst of going on tour.

SEE ALSO: WATCH ALL 4 COACHES TURN CHAIRS AT THE EXACT SAME TIME ON ‘THE VOICE OF HOLLAND’

What did you think of Will’s viral audition for The Voice France?