Who is the Avocado? ‘The Masked Singer’ Prediction & Clues!
July 24, 2019
Be the First to Comment 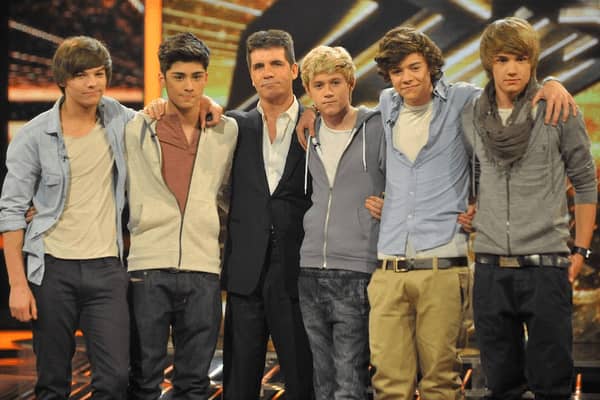 One Direction is one of the most famous talent show successes of all time. Getting their start on The X Factor UK in 2010, the five solo artists were put together by Simon Cowell to create a boy band. Little did they know at the time, they were actually creating a global phenomenon.

Here is a look at One Direction’s journey, nine years later!

Harry Styles, Zayn Malik, Liam Payne, Niall Horan, and Louis Tomlinson all started their journeys on The X Factor UK as soloists. When they were each eliminated during the Bootcamp stage, judge Simon Cowell had bigger plans for them. He decided to form the five artists into one boy band, qualifying them for the “Groups” category.

From there, the boy band had about two weeks to get to know each other and practice for their first performance. During that time, Harry Styles came up with the name One Direction. Their first performance, a cover of “Torn” by Natalie Imbruglia, sent them straight through to the Live Shows. And, as they say, the rest is “History.”

The boy band took the UK by storm, earning praise from the judges and audiences at home week after week. They made it all the way to the Finals, where they placed third behind Matt Cardle and Rebecca Ferguson.

One Direction Tops the Charts

But a third place finish didn’t drag One Direction down. Their first single, “What Makes You Beautiful” was an international commercial success. The song reached #1 on the UK Singles chart and peaked at #4 on the Billboard Hot 100. When their first full album, Up All Night, was released internationally, One Direction became the first UK group to have their debut album reach #1 in the United States. The boy band received a Guinness World Records title as a result.

And that was just the beginning of One Direction’s success. They went on to release three more albums and headline four tours around the world. They’ve won 7 BRIT Awards, 7 American Music Awards, 6 Billboard Music Awards, 3 People’s Choice Awards, and 4 MTV Video Music Awards, just to name a few. Every one of their albums hit #1 in the US between 2011 and 2014. “Best Song Ever” became their highest charting song yet in 2013, when it reached #2 on the Billboard Hot 100.

It’s truly amazing that a boy band assembled by Simon Cowell on The X Factor UK could turn into such a massive hit. There was no stopping this force of music nature!

Breaking the Band (Up)

But unfortunately, all good things must come to an end. In March of 2015, two months into the “On The Road Again” Tour, Zayn Malik announced his departure from the group.

The band continued to release music and tour as a foursome throughout 2015. And it did well for them too! “Drag Me Down” reached #3 in the US and #1 in the UK, Ireland, Australia, and France. Their fifth studio album, Made in the A.M., topped the UK charts and reached #2 in the US, making it the 6th-best selling album of 2015. Even one man down, the group still proved they had that one thing–the same thing Simon Cowell saw in all of them–talent!

After its success, the band members announced that One Direction was going to take a 18-month hiatus. Since then, each member has released their own solo singles. No one has confirmed yet that they will reform or when it could happen.

As solo artists, Harry, Zayn, Liam, Naill, and Louis have all found success on their own terms. Back to their time at the beginning of The X Factor UK, they have been able to explore their own sounds and styles.

Harry Styles released a self-titled album that topped the charts in 14 countries. His first song, “Sign of the Times,” was named Rolling Stone‘s Single of the Year in 2017. He has also done some acting, appearing in Christopher Nolan’s Dunkirk.

Zayn Malik’s first studio album, Mind of Mine, and its lead single, “Pillowtalk,” were met with critical acclaim. Zayn became the first British male artist to debut at #1 in both the UK and the US with his debut single and debut album. He has since released a second studio album and worked with artists like The Four‘s Zhavia Ward. The two are even nominated for a Teen Choice Award!

Liam Payne has worked as a producer and solo artist since One Direction’s split. He is signed to Republic Records. Liam released “Strip That Down” in 2017 with Quavo, which is an absolute banger. The song peaked at #3 on the UK Singles Chart and #10 on the Billboard Hot 100.

Niall Horan signed a record deal with Capitol Records as a solo artist. “This Town” and “Slow Hands” both reached the top 20 in several countries. The album those two singles were on, Flicker, debuted at #1 in Ireland and the United States. He has since toured to support the album and released songs with Maren Morris and Julia Michaels.

Louis Tomlinson made a return back to The X Factor UK, serving as one of its judges this past season! But prior to that, Louis’s debut single, “Just Hold On” with Steve Aoki, peaked at #2 on the UK Singles Charts. In 2017, he released “Back to You” with Bebe Rexha and “Miss You.” Most recently, Louis released a song called “Two of Us,” which is the lead single on his upcoming debut solo album.