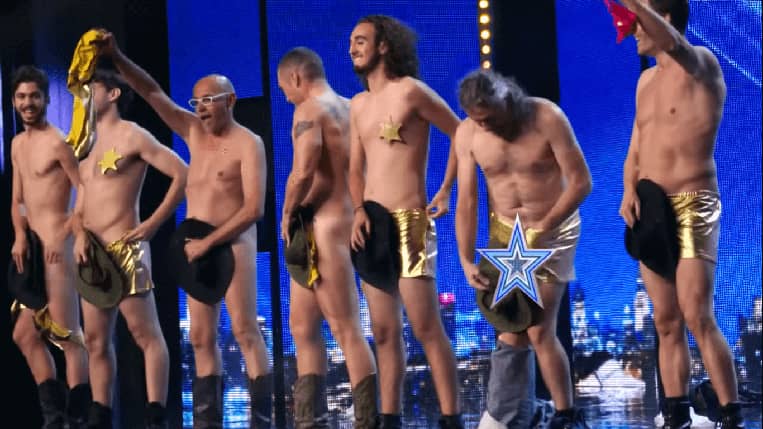 A spicy audition on Got Talent Spain last year caused one of the judges to lose her mind in one of the craziest moments we’ve ever seen on a talent show. It also involves one of the clumsiest stripteases ever.

The group auditioning is called Solos Ante El Peligro (Alone in the Face of Danger). Check out their audition below, and read on to find out how the judges reacted to their NSFW performance.

Male Strippers On ‘Spain’s Got Talent’

The group of seven men, aged 22 to 60, reportedly have various jobs — from police officer to genetic biologist. “We are wolves in sheep’s clothing,” they said before their audition.

The men started their performance in jeans, T-shirts, and cowboy hats. They started thrusting their hips and eventually ripped their shirts off. When they removed their belts, Got Talent judge Paz Padilla screamed and Risto Mejide hit his red buzzer.

The men then stripped down to gold underwear, which they removed from under their hats. One of the dancers was a little clumsy, and showed something that had to be covered up by the show. This caused Paz to run barefoot around the theater screaming. It’s like nothing we’ve ever seen on Got Talent.

What Did The Judges Think Of The Act?

Eventually, the men turned around to reveal the words “paso de oro” (the show’s Golden Buzzer) drawn on their bare backsides. When Paz finally calmed down, she said, “Oh, what I’ve seen! Some of them reached their knees!”

Paz reportedly told the group, “I am a woman of the world, I am a woman with experience and, from what I have seen, I give you a yes.” Fellow judge Edurne gave them a no, but Risto Mejide shocked everyone by saying yes, on the condition that they all got tattoos on their rear ends.

Dani Martínez’s “yes” vote sent the group through. But the surprises weren’t over. It turns out that the wives of the men in Solos Ante El Peligro are in their own striptease group called Las Barroquesque. They removed their bras and showed off nipple covers.

Is this the craziest thing to ever happen on a Got Talent show? It’s definitely high up on the list.