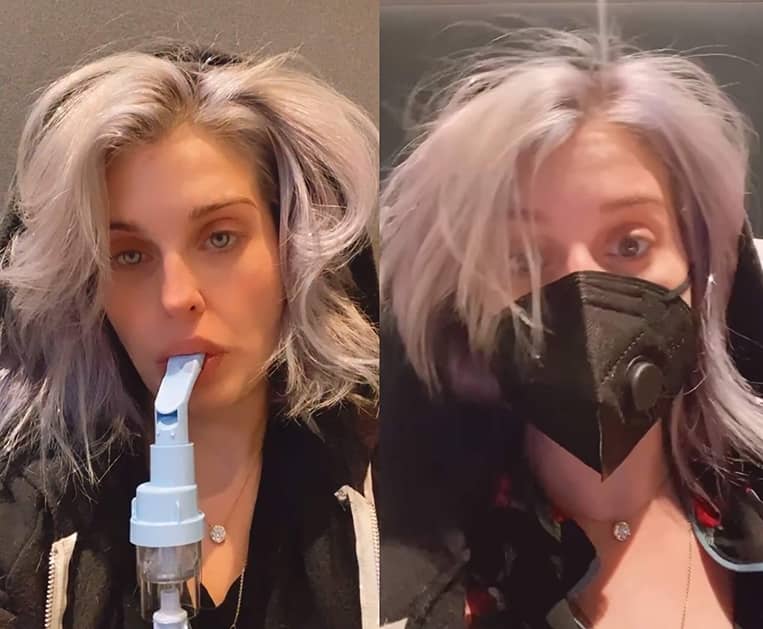 Kelly Osbourne has been bed-ridden for the past few days after experiencing COVID-like symptoms. She initially thought that she had COVID but later found out that it is a very serious case of bronchitis. She has been documenting her experience on her Instagram stories fighting the infection.

Kelly first began taking oxygen on Thursday when she thought she had COVID. On Friday she clarified that it was not COVID. “And this isn’t even COVID. My heart goes out to every single person who has COVID right now” she said on her Instagram story. Kelly also showed that she was on an IV drip after “throwing up so much.”

“So now we’re throwing up so much that we’ve had to get IVs… two whole bags” the former ‘Masked Singer’ star updated fans. She explained her struggles while wearing a black face mask. Bronchitis also triggered her asthma which has led to her using an inhaler and a few medications.

“So I thought I had Covid turns out I have really bad bronchitis that’s giving me as asthma yaay 2020!” the 36-year-old captioned a photo of her medications. Kelly posted a video saying that she is going to be staying in bed and eating chocolates. She also started nebulizer treatments to help with her breathing which she also posted videos of.

Two of Kelly’s young nieces previously battled COVID in September which was revealed by her brother Jack Osbourne in a podcast. “Someone who works for me went away, came back – and they didn’t tell me they were going out of town, they just appeared and were like, ‘Oh, yeah, we went out [of town].’ And my daughter picked up the drink that they set down and took a sip.” This forced their mother, Sharon Osbourne, to film her show The Talk remotely as she awaited her own COVID results in quarantine after having contact with her grandkids. She has since tested negative.

Kelly Wished Her Father A Happy Birthday While Sick

Even through her illness, Kelly posted a sweet birthday tribute to her father Ozzy Osbourne on Instagram. “Happy birthday Dadda!!!!! I watch you every day overcome the hugest obstacles” she wrote. “Through all of this you have become an even better father to me and husband to mum. We are so lucky to have you. To see how far you have come in the last year is insane. YOU ARE MY HERO. You are the real iron man. I love you dadda. I’m so proud to be your daughter.”

A young Kelly and Ozzy posed together in the adorable photos. They practically look like twins in all of the pictures and it’s clear that Ozzy has certainly stepped up as a father and husband after years of battling alcohol and drug addiction.

SEE ALSO: SHARON OSBOURNE TALKS ABORTION AT 18: ‘I WOULD HAVE BEEN A FAILURE. MY FATHER WOULD HAVE JUST GONE…BALLISTIC!’

We hope Kelly feels better soon and she even posted that she is being comforted by her puppies that have not left her side during this difficult time.