Simon Cowell Counts Down His Favorite ‘AGT’ Golden Buzzers
December 7, 2020
Be the First to Comment 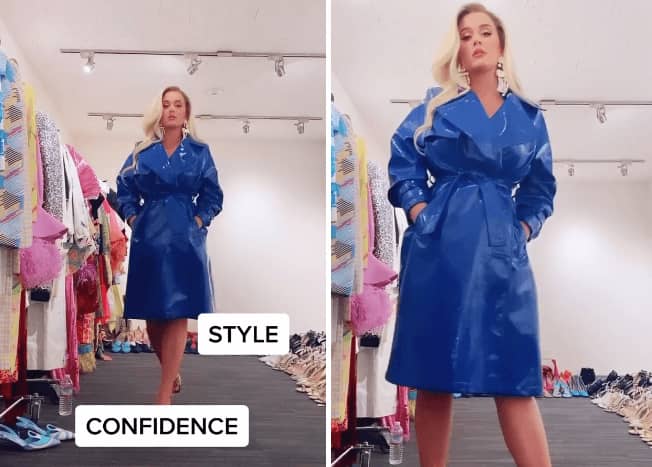 Katy Perry wears a lot of incredible clothes on American Idol and beyond. In a new video, she shows off what she wears underneath those clothes. It may not be what you’d expect.

Katy posted the clip on TikTok and Instagram. She captioned it with the hashtags #whatmakesawoman and #foryou. Check it out in the video below.

In the clip, Katy struts toward the camera wearing a shiny blue trench coat and heels. Words appear on the screen around her, including “power,” “attitude,” “style,” “confidence,” and “sex.”

When she gets close to the camera, she suddenly lifts up her coat to reveal … Spanx! The camera then shows a tag for the undergarment lying on the floor nearby. For a lot of women, it’s a totally relatable reveal.

It’s not the first time Katy has kept it real since giving birth to her daughter Daisy Dove in August. Today reports that, just a week after giving birth, she posted an Instagram story in a nursing bra, writing, “Hair and makeup by: @exhaustion.”

When Is Katy Returning To ‘American Idol’?

Shortly after sharing her funny Spanx video, Katy posted a few shots in which she poses for the camera in a gold dress. She captioned the pics, “MOTHER.” It looks like maybe she was on the set of a photoshoot when she shared the clip.

American Idol is returning for a new season on ABC starting on February 14, 2021. Katy Perry and her fellow judges Lionel Richie and Luke Bryan have already been filming the show.

In September, Katy tweeted about going back to work as a new mom, reminding people that being a mother is a full-time job in itself, while advocating for paid family leave. She added, “I love my job.”