Countless Blindsides On Survivor Has Us All SHOOK!

VOTE: Who is Your Favorite ‘America’s Got Talent’ Winner of All Time?
October 27, 2019
Be the First to Comment 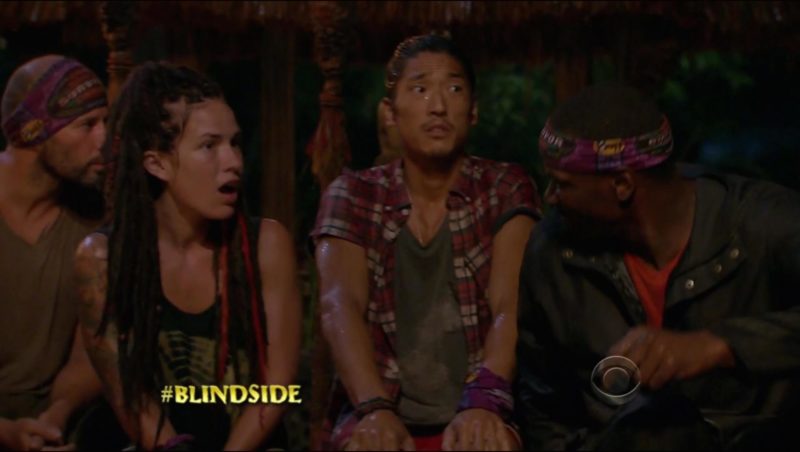 Typically, the pre-merge portion of Survivor is pretty cut and dry. While there are occasional blindsides, the players that get cut in this section tend to be seen as either annoying or unhelpful.

However, Island of the Idols has featured five Survivor Blindsides thus far. Players Ronnie, Molly, Vince, Chelsea, and Tom have all been knocked out the same way, getting convinced they weren’t the target and then being sent home. Vince and Chelsea even had immunity idols!

So, the question is, why? Why has this season been so full of blindsides this early on? Well, the individual votes might help illuminate that.

Ronnie’s Blindside – Too Hard Too Fast

The first player voted off the island this season was Ronnie, a professional poker player. From the previews, he seemed like someone who was destined to go far, so his early elimination shocked viewers around the country.

However, his elimination is very similar to the elimination of So Kim in Survivor: Worlds Apart. Ronnie and So both came out guns blazing, trying to immediately take control of the votes. However, both ended up blindsided as first boots in their respective seasons. Thus, we can attribute Ronnie’s elimination to playing too hard too early. On the plus side, at least he get’s $3,500!

While Molly also played a bit hard early, her blindside is much different than Ronnie’s. Molly was voted out due to her intelligence, very similar to how Mari Takahashi (QUEEN) was voted out in Millenials vs Gen X. Both were decided to be too smart by their opponents, and were subsequently voted out.

Vince Moua had been targeted at the first vote this season. In fact, he was the only other player to receive votes at the Tribal Council. However, his blindside was due to a classic fear on Survivor, having an idol.

Unlike Vince, however, the late Dan Kay didn’t have an idol when he was blindsided in the pre-merge of Survivor: Gabon for the same reason. Both were targeted in the pre-merge due to idol paranoia and subsequently were sent home because of it.

Chelsea’s blindside came as the result of being a part of a couple with Dean, very similar to how Figgy was blindsided in Millenials vs Gen X for being in a couple with Taylor. People felt threatened by how close the two were in both cases, and subsequently decided to take them out to prevent that closeness from hurting them in the long run.

Tom’s blindside is the most complicated out of the group. After the tribe swap, the Lairo members were outnumbered 5-3 on their tribe versus the Vokai members. As such, Aaron, Tom and Karishma were in the most danger of being voted out. Aaron was kept due to his challenge prowess, and Tom was ultimately voted out over Karishma due to being perceived as being better connected with the other Lairo members.

This also happened to Anna Khait on Kaoh Rong, when her Beauty tribe was in the minority after a swap, and she was voted off for being connected.

Survivor: Island of the Blindsides?

While this season has been heavy on blindsides, they do tend to even out at the end. No one season has featured zero blindsides or zero straightforward votes. So, the players will eventually take out someone who’s a challenge threat like Joe in Edge of Extinction, someone who could win the game like Kelly Wentworth in Cambodia, or a player who is floating along, like JP in Heroes vs Healers vs Hustlers.

Who will be blindsided next? Tune into Survivor at 8/7 Central on Wednesdays on CBS!

Why ‘X Factor: Celebrity’ Has The Lowest Ratings So Far!