FULL NAME: Nick Cannon
HOMETOWN: San Diego, CA,
BIRTHDAY: October 8, 1980
AGE: 42
RELATIONSHIP STATUS: Single
NOTEABLE PROJECTS: America's Got Talent The Masked Singer
BIO: Nick Cannon is known as a Nickelodeon child-star, but the multi-hyphenate entertainer has become a dominant force in the industry. Fans will know him from his time spent as a host for America’s Got Talent and as the executive producer and host of The Masked Singer. Cannon is also a comedian, rapper, actor, and talk show host.

In 2005, Cannon created the improv show Wild N’ Out. The comedy show has been running for over 17 years and counting. The entertainer has also released a handful of studio albums, TV, and film projects. In 2009, Cannon signed on as the host of America’s Got Talent. He hosted until 2016. In 2019 Cannon became the host of The Masked Singer. Cannon’s The Nick Cannon Show premiered in 2021, but was canceled after just one season.

The entertainer married music icon Mariah Carey in 2008, but the couple divorced in 2016. The two share twins Rocco and Roe. Cannon also has five other children with four women. 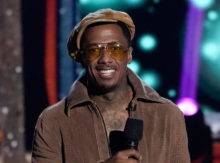