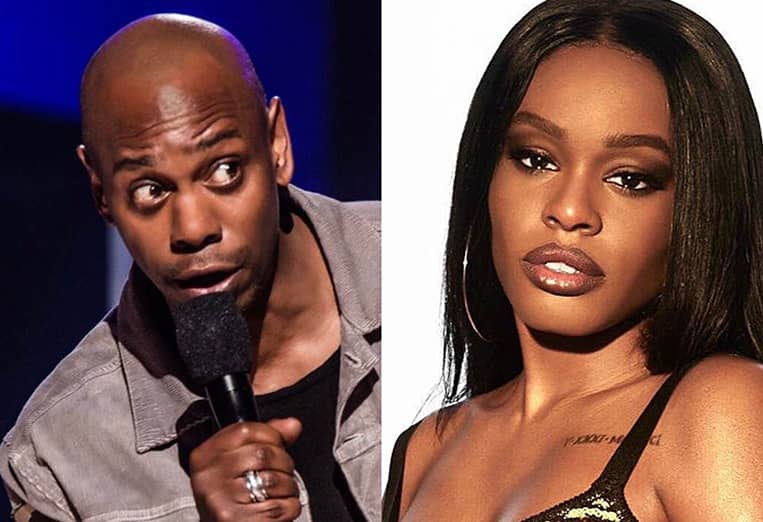 Perhaps one of the most controversial rappers of all time, Azealia Banks made her weekly bizarre claims. This time she alleges that she slept with comedian Dave Chapelle while he was married. And the internet is going crazy.

In a video posted on social media, Banks said she had some tea to tell the world. She did not disappoint with her entertaining rant, but are her claims true? Social media users seem to think they are not.

Dave Chapelle has been married to his wife Elaine Mendoza Erfe since 2001. They have three children together. He usually keeps comments about his wife to a minimum other than mentioning her in his standup routines. However, Banks was pretty adamant that she slept with Chapelle recently, even recognizing that a claim like this could ruin the comedian’s marriage. She got pretty graphic with her details and used explicit language to describe how their encounter went. Banks was bragging that Chapelle is “legendary” and that she would do it with him again if she could. People obviously began questioning whether there is any truth to her statements.

“Azealia banks destroyed her own career with them demons in her head now she tryna come for @DaveChappelle who gaf,” said one Twitter user. it is true that her career is not what it once was. This is due in part by the fact that she has gone on tons of twitter rants and disrespected so many artists in the past. She even accused Cardi B of using a ghostwriter for her hit song “Bodack Yellow.” Basically, she is known to start beef with people who have done nothing to her. In the past she was also known for making rash comments on Iggy Azalea’s posts encouraging the rapper to commit suicide. In another incident, she accused former One Direction member Zayn Malik of stealing her songs. She later apologized for all of the derogatory comments she made towards him.

SEE ALSO: RAPPER FUTURE SAYS ONLY 2 OF HIS 6 BABY MAMAS ARE HIS “REAL ONES” ON MOTHER DAY

Dave Talks About Relationships A Lot In His Standup Routines

Dave Chapelle has amassed a huge following after being in the comedy business for over 20 years. He has so many fans that find this so hard to believe. Ruining a solid marriage for an affair with a drama-stirrer does not seem like something he would do. In several of his comedy bits online, he talks about relationships in a joking manner that garnered tons of laughs from fans around the world. Again, ruining a relationship does not seem like something he would do from the way that he talks about how sacred relationships are.

So if we’re just judging on Banks’ history here we have to say that she is probably fabricating this story about sleeping with the comedy legend.

He has yet to respond to any of the buzz surrounding the claims that Banks made.

Why People Are Applauding Lorena Bobbitt For Cutting Her Husband’s Pen*s And Throwing It Away?