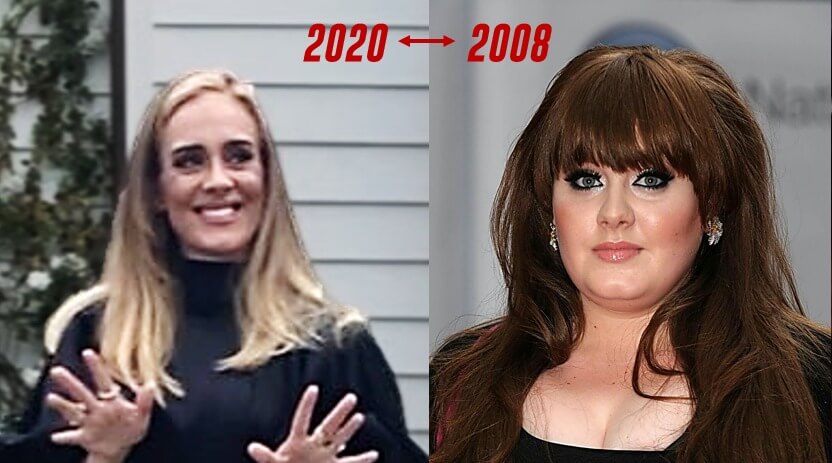 Adele’s return to Instagram sent the internet into a frenzy. The singer looks noticeably slimmer as she posed in a short black dress. While many people praised her for how gorgeous she looks, there were some bullies who claim that the star is “too skinny” after giving in to pressure from the media.

The singer who has not posted on Instagram since Christmas now has over 6.7 million likes on this post. But not everyone was impressed by her weight loss. “Sorry I think she’s gone too far her face looks gaunt. She used to be a role model for all girls struggling with their weight,” says one Instagram comment. Another person asked “Is this really her? She was much beautiful and real before. Now looks like one of those regular women.” Another comment said “Disappointing. You didn’t need to change yourself to fit into the world, the world needs to change to fit all body types.”

It seems like everyone has their own opinion about the singer’s weight loss. But truthfully, the only person’s opinion that matters is Adele herself. It’s her body and therefore she has to be truly happy in it which does not concern anyone else. However, this Instagram user does have a point being that people should realize that all body types are beautiful. There is not one single body type that should be more normalized or beautiful than another.

Some People Said Adele Is “Too Skinny”

Every celebrity has haters or trolls. But honestly, some people took it a little too far criticizing Adele. “Unpopular opinion… Adele is too skinny now and she looks like she’s aged. I think the weight loss was great and kudos to her. I just think she went a little too far with it,” said one Twitter user. What exactly is “too skinny?” There definitely is not a dictionary definition for the words “too skinny.” People all clearly have different opinions, but being harsh like this definitely is not cool. Judging by Adele’s smile in the photo, she seems extremely happy with her new look.

“Adele is looking hungry. I used to look hungry, too. I was hungry. I’m tired of this crap. It’s okay to be a human that eats. Skinny isn’t everything,” said another Twitter user. How does this person know that Adele doesn’t eat? That is a huge assumption to make about someone. Just because someone loses weight does not mean they had to follow unhealthy habits to do so. The singer has never explicitly said that she lost weight because being skinny is all that matters. Everyone has different reasons for losing weight, and most of the time it’s just to live a healthier lifestyle.

Adele’s celebrity status definitely puts everything she does under a microscope. “RE Adele’s weight loss. She looks incredible, obviously. But why the obsession? She was both beautiful and talented before she was slim. I am thrilled for her having the motivation to do this and I hope it was entirely driven by what SHE wanted and not media pressure,” said one Twitter user. We see this kind of media pressure all the time with celebrities that develop eating disorders and psychological issues because of the way that their bodies are constantly under scrutiny in the spotlight. They should not have to feel this kind of pressure at all.

Fans really want to emphasize that Adele is beautiful no matter what size she is. “I could strangle all these people comparing present Adele to past Adele. SHE WAS ALWAYS BEAUTIFUL. I freaking hate these media outlets glorifying this “glow up” and continuing the narrative that you need to be thin to be worthy or beautiful. F*CK THAT.” So many people have said that she has had a “glow up” which makes it seem like she was not pretty until she lost weight. This term is just inappropriate, especially because it could cause a lot of people to have self-esteem issues. Just because she looks a little different now does not mean she looks better or worse than she did.

One Twitter user posed an important question. “Would Adele get the same reaction/attention if she was skinny and then gained a lot of weight? No… y’all praise being thin/skinny way too much.” This has never been more true. People who are plus-sized or curvy are still beautiful, even if they have been bullied or told otherwise.

Though Adele looks amazing now, she looked equally as amazing before. Just because she lost weight does not mean that she had a “glow up” or that she is “too skinny.” It just simply means that she made a choice to lose weight. Sure, being in the media or the spotlight definitely can cause people to feel insecure about their bodies. They feel like they have to live up to society’s beauty standards and the pressure placed upon people is not fair at all. Body positivity needs to become a part of the mainstream media. All body types of normal people and celebrities should be celebrated.

Regardless of what the bullies think, we think Adele seems like she is thriving on her birthday. As long as she is happy that is all that matters. Again, it’s her body and she makes her own choices. We are excited to see this music icon post more on Instagram in the future.

After Her Collab With BTS’s Suga, Singer IU Has Had A Tough Life & Battled An Eating Disorder